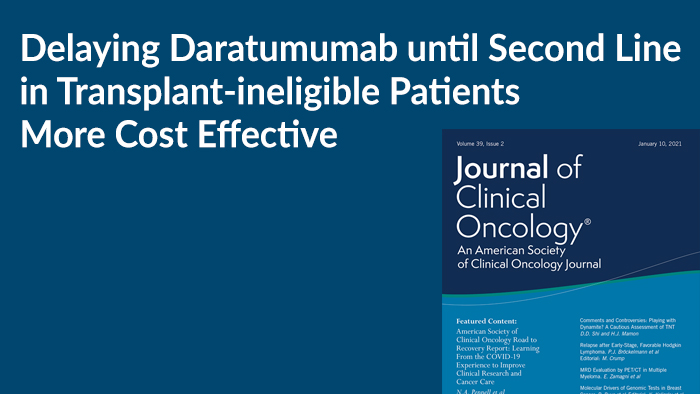 A study published in the Journal of Clinical Oncology suggests that using daratumumab in the first-line setting for transplant-ineligible patients may not be cost-effective under current pricing.

The MAIA trial found that addition of daratumumab to lenalidomide and dexamethasone (DRd) significantly prolonged progression-free survival in transplant-ineligible patients with newly diagnosed multiple myeloma, compared with lenalidomide and dexamethasone alone (Rd). However, the high cost-effectiveness of this strategy is questioned due to the high cost of daratumumab. To determine to cost-effectiveness of daratubumab used in this setting, a Markov model was used to compare healthcare costs and clinical outcomes of transplant-ineligible patients treated with daratumumab in the first-line setting compared with a strategy of reserving daratumumab until the second-line.

Based upon a willingness-to-pay threshold of $150,000 per QALY, the cost of daratumumab would need to be decreased by 67% for first-line daratumumab to be cost-effective.Delaying daratumumab until subsequent lines of therapy may be a reasonable strategy to limit healthcare costs without significantly compromising clinical outcomes.

I think auto-transplant is really cheap - definitely much cheaper than NEW Drugs - and not costing > $ 1,000,000. Out of US, who can afford it ? And how long we can afford it ? https://t.co/THjTbiBarY

These studies are CRITICAL as to why we need OS benefit before changing practice!
https://t.co/K596iMpP4q

Excellent read- a refreshing perspective, and yet another reason- why without an OS benefit we should consider whether routine up-front use of daratumumab for all comers is cost effective or not. Great work! https://t.co/yKkgwCY2em

Hot off the press in JCO, cost effectiveness of frontline Daratumumab among older adults with MM. ICER $618,018 per QALY. Time for value based pricing in the US? Work led by MS3 Kishan Patel, @sfhYALE @DiMengyang https://t.co/xh3Nc9hvb1