FDA Approval of Selinexor After At Least One Prior Therapy 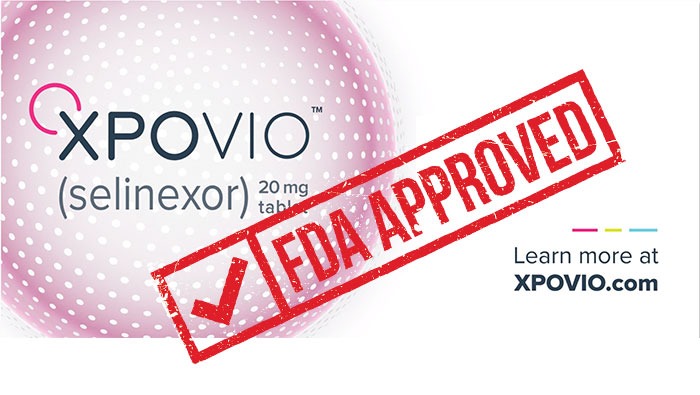 The U.S. Food and Drug Administration (FDA) has approved XPOVIO® (selinexor) an oral Selective Inhibitor of Nuclear Export (SINE) medicine, in combination with bortezomib and dexamethasone for the treatment of adult patients with multiple myeloma who have received at least one prior therapy.

XPOVIO was previously approved under the FDA’s Accelerated Approval Program for the treatment of adult patients with relapsed or refractory multiple myeloma who have received at least four prior therapies and whose disease is refractory to at least two proteasome inhibitors, at least two immunomodulatory agents, and an anti-CD38 monoclonal antibody.

The FDA approval of XPOVIO’s expanded indication is supported by the results of the BOSTON study, a multi-center, Phase 3, randomized study (NCT03110562), which evaluated 402 adult patients with relapsed or refractory multiple myeloma who had received one to three prior lines of therapy. The full results from the BOSTON study were recently published in The Lancet and can be found here.

Results from the BOSTON Study

The primary endpoint of the study was progression-free survival (PFS) and key secondary endpoints included overall response rate (ORR), rate of peripheral neuropathy, and others.

In addition, the following results favored SVd therapy as compared to Vd therapy: